Every year to check I am still relatively healthy and not been spoilt or rendered unhealthy by copious pies I do my annual physical. Mt Ventoux by bike
And so it was this morning I set of across the marked line at about 6.45 and headed forth up the hill. The Mountain is a constant up. Unlike many such as Alpes D'Huex which provide a short stop or at least a level part at every turn. Ventoux is about Up Up and more UP. Physically its demanding, but mostly its mental. For me its about constantly being overtaken by whispish French Dutch German and other European riders replicating the greats of Lance and the rest of the Tour. Signs adorn the route, Wiggo, Lance, Schlecks etc. None for me today though, the Hyde support wagon will just have to do. 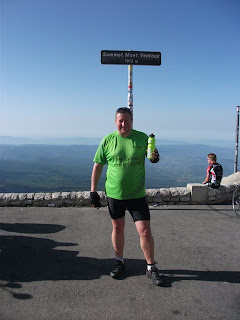 So back to the mental struggle, coping with the overtakes is one thing, constantly looking for the magic 800M to Chelet Reynard. A sure sign that its nearly done. But Ventoux will always surprise you. After a water fill at Chalet Reynard you think you have only a short distance to go. Its only 6K left. But its not any 6K, this is an M&S 6K. It gets steeper. The sun is out full on even at 9am. And the last bit actually is steeper.
So finally to the top and the bliss of knowing the best is yet to come. After the obligatory pics and the purchase of a badge to go on the bike (alongside the Manx) its off downhill. Wow Wow Wow. Always great to be going 30+ freewheeling for 20 Km. Especially (and this is not the nice bit, sorry) seeing everyone about to start climbing up. But knowing their pain, is I suppose a way of sharing it.
A coffee and chill in Malecene and back then ride back to Bedoin and hit the pool, waming it by several degrees.
So worthwhile, absolutely. Did I pass the medical. Yes, personal best. So I should be good to go for another 12 months. And retain the 100% attendance since I joined.
Is it a fast time. Absolutely not, many people I know, especially the Cyclists within Cumbria Police could eat it in that time and probably much less 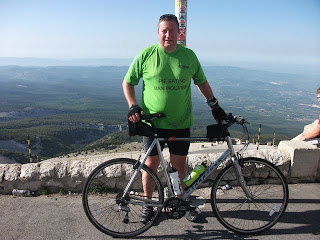 So a great start to the hols.

Pics are on the site opposite under Piccassa Albums but more to come.

Thanks also to support from my Higher Authority and for the pre holiday encouragement from Steve Sharkey at Elite Fitness Penrith.

For help adding links see How to add in line links