A rainy day up Latrigg

Latrigg is just north of Keswick and is a small hill with a stunning view of Keswick, Derwent and the surrounding hills. For a short walk the vista is stunning

Wainwright states it is good for a view whatever the weather

So to test the theory we popped up today in pouring rain.

He is absolutely correct. A great muddy wet walk yet still some beautful views.

There are of course 3 rules in photography

1. Have I got the right kit. Is there a technical solution to the problem or the picture i desire
2. Am I being artistic enough. Do I have the right composition, view lighting etc
3. I havent walked up this rainy hill not to take a picture 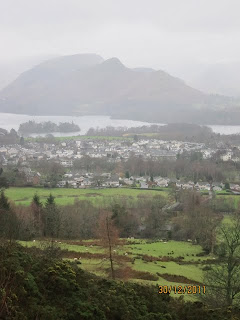 This is the view on the way up 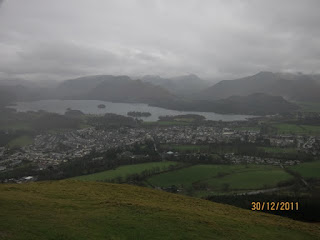 And the view from the top

Finally lost of other pictures on my Picassa album opposite

Here is a link for some better pics

Best wishes for the New Year all round
No comments:

Email ThisBlogThis!Share to TwitterShare to FacebookShare to Pinterest
Labels: Latrigg

ECPAT is an international charity aiming to tackle Child Prostitution and Trafficking.
It is a great charity and here is a tale of what some people are doing this December and all over Xmas to support it,
ECPAT Youth Coordinator Debbie Beadle has done amazing things to set up and run the ECPAT UK Youth Group to support child victims of trafficking.

8 months ago Debbie declared she was going to row across the Atlantic to raise awareness of ECPAT UK and the campaign to get guardians for children who are victims of trafficking.
Now here we are approaching Christmas and Debbie and 4 other amazing women are two weeks into their epic and record breaking attempt to row across the Atlantic on their boat called "˜The Guardian".  They are doing incredibly well and you can follow their voyage on the websites below and listen to their voice blogs.
They started off their journey in the Canary Islands 17 days ago and are heading towards Barbados overcoming new challenges every day. Not only that Debbie and the team are going for two world records, including a world speed record, and they are currently in 7th place and rowing against 16 other teams in the world's toughest rowing challenge. With under 1700 nautical miles left to row they really want you to read their blog, get inspired and donate.
This Christmas please remember Debbie and the rest of the Row for Freedom team as they endure broken equipment, blisters, 30 foot waves, flying fish and boils on their bum. It's all for a great cause and to remember the plight of those children who are so far away from home and who need just one person they can trust and who will be there for them.

Read Debbie's blog  written from the boat in the mid Atlantic: www.rowforfreedom.com


Follow their daily progress on The Guardian in the race at : www.taliskerwhiskyatlanticchallenge.com


The lead for this is

PWC has recently launched its research Cybercrime: protecting against the growing threat
http://tinyurl.com/yg5q2td

This is a wide ranging study into the causes, reactions and responses to cybercrimes. Having overcome the normal issue of finding an appropriate definition of Cybercrime it outlines a number of interesting points that will be of concern, and more importantly value, to Business and Public sector alike
Some initial surprises include that respondents fear the reputational damage as much as the financial damage,  probably reflecting how sensitive everyone is to adverse comment or being seen to fail.
The paucity of a review function within an organisation and appropriate methods of control is surprising. Clearly outlining a need of the CEO to get a grip, the report focuses on a range of ideas to keep any organisation in a state of better safety (complete safety is probably not possible in today’s globally connected digital world)
Of immediate concern was the number of executives who could not state whether their organisation had suffered a loss or an attack.
Some simple comments such as “advancements in technology make it easier to commit cybercrimes” litter the document.
Creating a balance between the Risks, Harm and Threat is clearly much easier if there is an adequate supply of quality rmation
The report suggests that planning for known threats including having, for example, an agreed approach to investigation and media would be of serious value
What was surprising was the impact of attacks on staff morale which was at 28% a high score as collateral damage. This is not something that seems to be covered elsewhere to a large extent.
In terms of who causes these attacks or crimes, the preponderance of ex or current customers, vendors and agents is clear. Look inwards before you look outwards is probably the message
The report shows an interesting change in the detection methods used, from audit to intelligence led proactivity. In other words, don’t rely just on simple audit processes to reveal attacks or concerns, link it to existing active investigation.
In summary a very useful addition to the Cybercrime agenda
I would personally add the value of greater Social Media monitoring and seeking feedback. Perhaps having a clear compass for what is acceptable and what is not (see my comments on the Police Code of Conduct)
http://www.stuhyde.com/2011/06/police-code-of-conduct-approach-to.html
I would also support the creation of a Company/Organisation/Force-wide Cyber Security Board headed by a senior executive to cover all aspects of digital connectivity. This works well in Cumbria
Remember as well that the risk is not just digital. Written documents can equally be subject to “offensive activity” or loss/ Social engineering should also be a major issue for future plans.
Finally in the light of other documents hitting the headlines I have not been paid, invited or rewarded for this piece by anyone, including the authors. I do, however, value their contribution to cyber-safety
Comments welcome
No comments:

We ran a session the other day with colleagues from around Cumbria who we have identified as "movers and shakers" in the Social Media world.
We brought them together to help us understand the things that work and those that dont
In short a Social media tweet up

We used the Tag #cumbrianetwork

Some of the findings included

Some areas our critical friends suggested for the police

Keep having a presence and do it right
Use it for Major incidents
Maximise the use of free sites eg FB Twitter YouTube, Flikr, Audio Boo
We need to accept that most people do not talk about crime on SM. Only 3% of time was spend discussing crime

In relation to specific feedback we were told that sometimes there are big gaps of 8 or 10 hours in our messaging. This should be reduced
Many People followed us because of the presence of a police badge


Most of the time people are not interested in policing issues and use SM for it's main. Purpose social interaction.
Many will only be interested if there is an issue
Eg if snow then interested but when it melts not so
The grop suggested we make better use of the many highly connected people to get messages out
One suggestion is that we build othe Cumbria Alert system we set up

Could use the link on our profile to stories about police activity.
It was a valuable lesson in the power of listening ti informed people and their ideas will be used over the next few months to change the way we work.

The most immediate change was to remove some of the negative language In our profile. Don't use Don't


They expressed the importance of Getting accurate messages out


Need to address issues on FB as well as Twitter. We need to increase the work o our Facebook site to match what we do on other SM sites

No don't do it was the response. Simple feedback is always best.

Generally a request for more information about what we do and how we do it, particularly a suggestion we do more to let people know how they cam protect themselves, warnings about hoaxes and frauds, linking with Trading Standards perhaps.